Back in 2009 I was pretty excited about the potential surrounding Google Wave, so it’s a shame to hear that Google has pulled the plug on the Wave development project. Despite a small but dedicated “Save Google Wave” movement that has emerged in defiance of the app’s demise, Google has called time on the project and development has ceased. For those of  you not familiar with Wave, I suggest you check out a blog post written by my colleague Toby Catlin. Hello Wave, or it is Wave Hello? should tell you everything you need to know.

We got it
With Wave’s demise many people are focusing a lot on whether the collapse is an indication that integrating email and social media for marketing strategy is even a good idea. However this POV is obviously more relevant to B2C based organisations, and I still hold out high hopes for successful (and organised) real time communications via social media channels.
I was moreso attracted to the real-time collaboration and conversation element of Wave, and despite its tricky UX we started using Waves at Caplin for mainly development-based discussions, particularly when collaborating with developers who were offsite.
We do often embark on long email threads and for lighter topics, we use Yammer as an internal blogging tool. The email discussions could sometimes clutter up the mailboxes of those not directly involved, and not everyone remembers to look on Yammer all the time. So in this sense, Wave seemed a focused, condensed way of holding these discussions. We also liked the idea of writing a few of our own code-related robots for making standard text turn in to helpful, real-time dynamic information. Google also talked a lot about gadgets which really piqued my curiously as I wondered if there would be a Google gadget revolution not unlike the way Apple apps have gained momentum so quickly.

Was it a Failure?
To say that Wave was a failure seems unnecessarily harsh to me. Once we all got a decent idea of what it was capable of, we navigated our way through the admittedly still buggy interface and managed to use Wave the way it was intended. Many people seem to think the reason Wave didn’t take off was because people didn’t “get it”, and I suppose in some instances that was true. But I think it goes further than that – in my opinion there are two big reasons Wave didn’t take off. 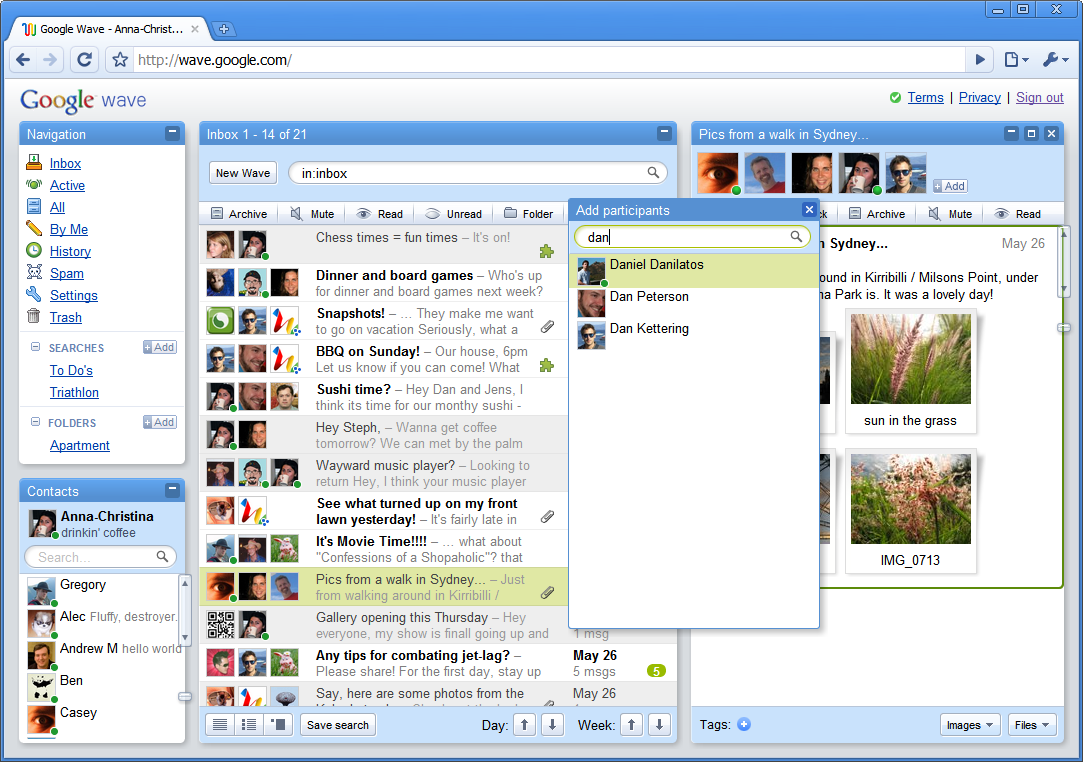 Great expectations
It came as news to me that Wave was intended to be an email replacement. I think they were aiming a little high on this one, especially since Wave was so confusing you often had to rely on getting emails to tell when a Wave had been updated!
The day I finally got my invite I reckoned I was going to be able to have some really cool enhanced messenger-like chats with my friends where I’d be throwing up images and thinking of ideas for new robots in no time. But I logged in, managed to connect to two other friends who had also secured invites, and the three of us managed a rather pathetic Wave. Hardly Point Break.
I didn’t expect to use Wave for B2B marketing purposes (the same way I don’t send emails to our prospects at their personal accounts). But I would have thought my mates in B2C marketing land could start having a great conversation with all those consumers in their databases with gmail addresses. Not so I’m afraid, as Wave accounts were not automatically distributed to everyone with a gmail address.
Exclusivity is nice, but not necessarily appropriate for collaboration tools.
Was it the UX?
If you found out how Wave was intended to be used, managed to find some people to Wave with then your next step was actually participating in the Wave. The UX did, at times, make this rather difficult.
When a Wave got really long (picture a very long thread about an internal project) it was often impossible to tell when a change was made to it. Unlike emails, you could simply go in and change or add to a Wave wherever you liked. But it wasn’t always obvious when this had happened.
Beyond that, there didn’t seem to be any way of saving Waves to refer to them later. They simply seemed to live on and clutter up my screen until I got tired of them and exited. I did always wonder what happened to the content in a Wave after I left it. Security and privacy policies were not made clear to me.
And so…..
A few articles I’ve read seem to be alluding to various other reasons for Wave’s demise. Its lack of integration with MS Office was one I read a few days ago and I don’t really agree with it. If the ideas and aim behind Wave had been more focused, the marketing and business case more specific and the application itself less buggy, it would have succeeded and any necessary Microsoft (or Adobe) integration would have came about when required (the same way you can import Google docs in to Word, or export them as pdf’s.)
The other thing I’ve read is that Google has failed where Facebook will succeed, and again I think this is wrong. I know that Wave was social media based in the true sense of the word in that the more people that used it, the more people effectively got out of it. But Google was trying to do more than that – the bit about the sharing images and media in real-time (which Facebook doesn’t technically even manage as you can’t drag and drop and have it live in real-time) was only the tip of the iceberg. A lot of what Google developed will be introduced to their existing products, and I am sure we’ll find the family of Google apps benefits from the Wave experiment.
I applaud their efforts and will certainly have my ear to the ground. There are rumours that the developers working on Wave have been taken off the project to concentrate on Google Me, an intended competitor to Facebook. Interesting. So watch the Google space. While the Wave may be ebbing away, the storm could be just around the corner.