After deciding to adopt a new process a key challenge is to actually start doing it. This is the story of how our team decided to implement code review as part of our process, and how our kanban board helped us.
The kanban board helped us visualise this new step in our process and allowed us to see that despite our belief and enthusiasm in introducing code reviews, we weren’t actually doing them. Reviewing the board at the daily stand up meeting provided visual feedback that lead to productive conversations about what might be stopping us and how we could improve. After we implemented new behaviours the board highlighted whether they made a difference and allowed us to continue to monitor our behaviour. 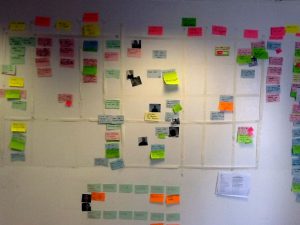 The team’s kanban board after we’d got rid of the queues, with no cards at all in the Code Review column.

At the team meeting where we discussed a code review step we wanted to introduce ‘just enough’ process to make sure we would actually do it. We agreed to do the smallest thing that could work and to avoid being too ambitious or strict in how we defined code review. We came up with the following rules:

We also agreed to come back in a few weeks and review whether we thought the benefits of doing a code review were worth the costs by asking the team for examples of whether code review was ‘helpful or harmful’.

What the board showed next: Good intentions were not enough

During the daily stand up meetings in the first week of working with the new process, many tasks were described as “finished development” but they hadn’t been code reviewed. We started moving those cards to the right of the “In Dev” column. Within a couple of days it was clear that we had a queue of index cards to the right of the “In Dev” column.
We had a brief discussion on the queue of cards to the right of “In Dev” and we agreed that it was a sign that we weren’t doing code reviews in an effective way. We said we’d focus on doing code reviews and ‘unblock the queue’ that day.
At the next day’s standup the queue was still there. This illustrates an important point; changing the way we work is hard and sometimes good intentions are not enough. At that day’s stand up meeting we had a deeper discussion about what was preventing us from doing it and identified two major issues.
The first issue was a concern about interrupting other developers. We agreed that one solution was to do the reviews directly after stand-up, since the team had all been interrupted.
A second issues was making it more obvious which cards were actively being worked on “In Dev” and which cards needed a code review. To be more explicit we created a column on the board between ‘In Dev’ and ‘Waiting for Test’ called ‘Code Review’.
By the next day’s stand up the queue of cards in Code Review was gone and we haven’t seen a queue of work build up in code review since.

Visualisation and productive conversations are key to process improvement

The kanban board showed us that our behaviour wasn’t producing the goals we wanted. Seeing this and discussing it as a team helped us understand more about what was stopping us and allowed us to experiment and test new solutions, as well as providing ongoing feedback about whether the new process step was working effectively.
What’s your experience implementing new process steps such as code review? Have you found visualising has been effective in reflecting how well your doing? Have you redesigned the way you visualise things in order to help you act more effectively? Let me know your views and experience in the comments.