Being sadly beyond growing a “quirky quiff”, I was in two minds as to how I would react to the final day of Digital Shoreditch, or “Nudgestock”, devoted to behavioural design.  I pocketed the free pastries like a tramp at a wedding, while the audience in the main hall was whipped up into indifference as the day’s speakers and events were announced over a musical bed.  The abortive attempt to get people to clap along terminated, and a cloud of irrational bad-temper began to descend over me. 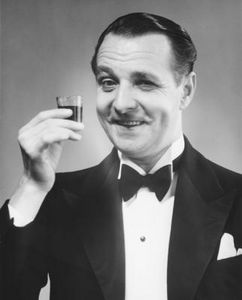 It didn’t last.  Rory Sutherland was first up.
Rory looks like a jolly jape prone buck from the 1920’s, he sounds like one too – he’s certainly not trendy.  But is he cool?  Why yes he is. He is a very brainy chap, but it sits lightly on him.  He knows his onions, and you suspect he likes them sautéed in butter and flambéed in Armagnac.  It’s great that a youngish discipline like ours can have a bon-viveur grandee like Rory.  His main themes were:  Abandon certainty.  I have, long ago in fact, and as getting it absolutely right is impossible, be the least wrong you can be.  That’s true as well, but it’s a harder sell: There is no amount of user-testing or design work that can totally account for the strangeness of folk – you have to do the best you can, be thorough, be rigorous, be creative and be prepared to do it again and again, getting better all the time.

We left the main hall to be sold snake oil in one of the smaller rooms, and when we returned Laurie Santos was showing children and primates being tricked and cheated by psychologists.  The audience laughed and then squirmed when they realised what they were laughing at.  Her findings though, were interesting:  Our need to share information and teach is responsible for our success, but it can also lead to irrationality and can prohibit innovation.  At Caplin Systems we experience this first hand quite often in the discovery phase of projects; it’s one of the reasons why we need strong supporting evidence before we propose any kind of innovation to a client.
The main hall speakers were there for a reason; they all had something interesting and useful to say, and some of them were brilliant at saying it.  Paul Craven from Goldman Sachs stood out, and not just for the blazer and tie combo that made him look like he was somebody’s dad, who’d come to say “Get your coat now if you want a lift, I’ll be outside in the Jag”.  Again he was warning about irrationality, and also bias.

Ian Robertson and Jez Groom were also highlights for me, but the speaker who most made me want to stand up and shout “There, what did I tell you? That’s what I’m talking about!” was Simon Ruda from the Behavioural Insights Team at The Cabinet Office.

If you suspected big brother was watching you, turns out you were right, but who knew the men from the ministry were paying such close attention?  The simple, think, test, decide, implement and review approach; making ergonomic changes backed by actual metrics is our approach at Caplin Systems:  Improving UX through understanding the user and the effectiveness of design choices at a granular level.
So I liked the two posh blokes, the animal experiments and the representative of Her Majesty’s Government best, which cripples my cred right there, but then again, I think most people felt the same way.