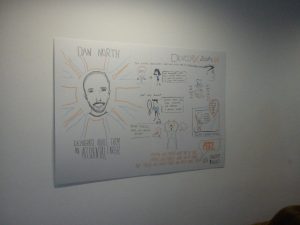 Two talks caught my eye on the schedule for Devoxx 2014, and I couldn’t wait to get to them.
John Smart was over from Australia to talk about testing (and no doubt BDD too). I was hoping he’d have some Thucydides examples, and if not I’m sure I’ll be able to talk to him anyway. The other talk I really wanted to see was by some people from Shazam talking about how they automated their mobile Android testing.
I got to both these talks and some others, and chatted to our friends on the BladerunnerJS stall:
Liberating the black box
A fun and interesting talk. The quad-copter was available to view in the main hall, and during the talk there was a video of it’s maiden flight. The important point being that with relatively inexpensive equipment data could be collected for a flying quadcopter, and transmitted half way around the world in less than a second. The only slight caveat in the test setup is that a real satellite dish transmitter is still about 0.5m square and weighs more than a quadcopter can lift. Meaning that there was a wireless link to a ground based satellite dish to enable the worldwide comms. 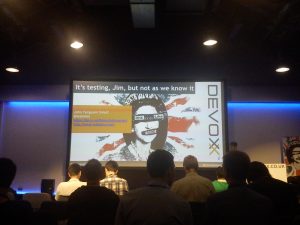 It’s testing Jim, but not as we know it
John Smart is the man behind Thucydides. A BDD style Integration testing framework based on JBehave and Webdriver, with PageObjects built in. This talk was more about Agile Testing and how to implement BDD properly. A lot of the examples were familiar from his book BDD in Action. We are starting to use Thucydides at Caplin, and may extend it’s great reporting capabilities to cover some of our JavaScript testing too. I had chat with John after his talk, and as the beers were being handed out. He offered to forward on some code so that we could spike extending the Thucydides reporting for our Javascript test reports.
Responsive Web Design, get the best of your web design
A great session on what responsive web design means and how to achieve it. One of the takeaway points at the end of the talk was to consider whether you want to do Responsive web design on the client, or Adaptive web design from the server? They are not mutually exclusive, so probably a mixture of both may be best. The talk included relying on ems rather than fixed pixel widths. Then getting the browser to work out sizes from a baseline size.
There was also a recommendation to use the picture element, and if necessary a Picturefill polyfill to enable it if it might not be available in your target browser yet. Other recommendations were to use Media Queries, and to look at the Little Pea Bakery site as an example of how Media Queries can be used. And ‘A List Apart’.
Future Computing: Educating young developers with Java and Greenfoot
Educating the developers of tomorrow. A very cut down version of Java, which makes developing simple games easy. The presenter ran through a quick game with movement, sounds, and collision detection. A simple game could be built by a 10 year old in an hour or so, and was the next day at Devoxx for Kids. And the Joy of Code and other docs shows how to do much more.
The Saturday following the conference there was ‘Devoxx for Kids’ which included hacking Minecraft (e.g. to increase the power of TNT explosions). As well as more Greenfoot, Arduinos and Lego Minecraft programming.