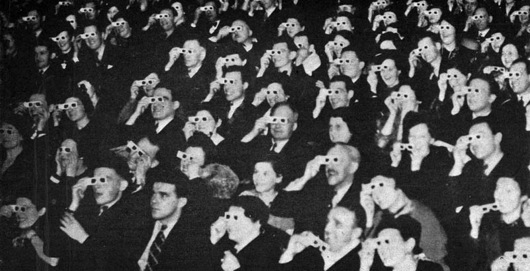 Ok…I like gimmicks as much as the next guy, but i feel like there are some major
issues completely overlooked by this Hollywood bandwagon…

In traditional “2D” films, camera focus was used to create the illusion of depth of field.
For example, Some blurry branches and flowers in the foreground, A crisp sharp
romantic couple in the mid-ground, and lovely soft focus sunset in background. We
manipulated the depth of field of cameras in order to accentuate the sense of space in
the image. This was a good solution to mimic the way in which our eyes focus.
Now in 3D, this trick doesn’t work any-more. As the image is already in 3D there is no
need to “fake perspective” by creating blurry back or foreground. Your eyes want to freely
wander in this dimension and expect to be able to focus on what they like, but they can’t.
This is what it feels like… 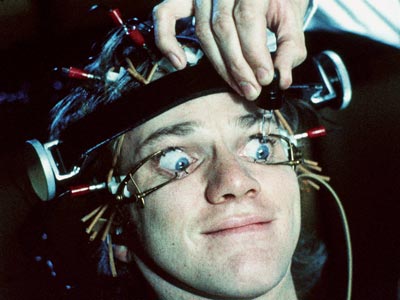 A true 3d film should take into consideration my eye movements and how much
my eyes are crossing or not. With this information it should blur dynamically whatever
I am not focusing on. This would be a more immersive experience, but even then this
technique only adds a little depth using two fixed perspectives.

Does it Enhance the Story?

No. Film-making is all about immersing the audience, making them feel
emotions and journey through perils and joys. You are meant to forget who you are
and follow the protagonists through an experience. A 3D movie cheapens this illusion
by reminding you that you are in no real danger as a fake arrows zoom past or a set of
jaws comes out to gnaw at you, laughable.

As most movie buffs,  I’m not fan of this recent trend to make everything ‘in your face’.
However, I am definitely interested in it’s development. For now while 3D in movies has not
evolved past a 1950’s curiosity, it is looking very promising for gamers and the
whole gaming industry. It will also one day turn into holography, which has the advantage
of being able to display hundreds of perspectives, as opposed to the bare minimum of two.
(for more info on this check this BBC news article). This will really start changing the landscape
of media as well as making us question further into the nature of reality.
Today we just got one step closer.