I spent a very informative time last Wednesday at the first day of this year’s ThoughtWorks Live event. The conference was videoed, so I guess TW will be making the conference material available in due course. Here’s my take on what was presented:

Presented by Cyndi Mitchell, MD of ThoughtWorks Studios, she did a great job, apparently stepping in for Jim Highsmith at the last moment and presenting a good overview of current thinking on how agile principles can be applied to more than just the development and project management functions.
She covered goals and constraints, highlighting the choice a business should make between responsiveness and efficiency, suggesting that one should be the primary goal and the other a constraint. She contrasted Google, who’s primary goal is responsiveness, with Walmart, where the main goal is efficiency. She went on to talk in detail about the “Core Adaptive Leadership Model”, the role of agile leaders in organisations that are striving to be responsive and how, just as sometimes it’s hard for developers to adopt agile principles, so it also can be for leaders.

She discussed both Doing Agile (the adaptive leadership actions of speed-to-value, do-less, quality and engage-and-inspire) and Being Agile (the need to transform leadership mindsets to be adapting, exploring, facilitating and riding paradox). I liked the “Riding Paradox” ideas the most – the thought that an adaptive leader should move towards AND rather than OR leadership – not making decisions based on one thing OR another (Scrum OR Waterfall, velocity OR quality for example), but finding a way to take the best from each.
There’s an increasing amount of good material appearing in this space (eg. Jurgen Apello’s Management 3.0 and Jim Highsmith’s paper itself) and these ideas are a useful addition. 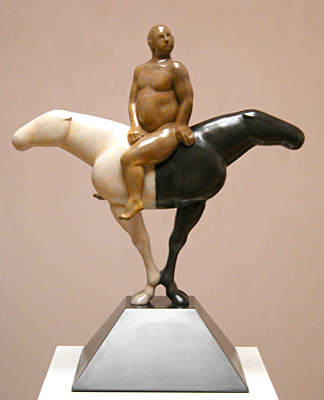 Done Agile. What Next?

Presented by Dave West, currently with research firm Forrester, Dave took some stick from the audience when he confessed to being partly responsible for developing RUP in a previous life, but he recovered quickly to present a highly animated and entertaining talk on where to focus once you have the agile development process working well.
His take on Continuous Deployment, based on research by Forrester into many organisations, looked at the whole process from initial idea to release in production. He introduced the idea of the Water-Scrum-Fall process, suggesting that most organisations, even ones that do agile development well, continue to be far from agile either in the up-front requirements capture and project definition phase, or in the final deployment to live operation phase.
His suggestion for tackling this is to start at the Ops end of the process, because, while still hard, it’s easier to do than addressing the front end. His assertion is that if you fix the back end so that deployments are simple, fast and can be done whenever the business wants, that will force the front end requirements stage to adapt. The movement towards extension of agile development practices into the ops arena (the DevOps movement) is central to the concept of continuous deployment and a recurring theme of the conference.
Amongst anecdotes about doors falling off cars and x-ray machines, Dave stressed the need to scale agile, fight Water-Scrum-Fall and aim to continuously deliver.

Presented by Bjarte Bogsnes from Statoil, for me, this was the unexpected gem of the conference.
Bjarte introduced the idea that large corporations (and by inference, therefore, any organisation) can cope and indeed thrive without an annual budget process, or even a travel/expenses policy and budget. He highlighted the absurdity of setting an annual budget and dishing out large pots of money at the start of the year, when in fast moving businesses, it’s hard to guess what’s going to happen next month, never mind in a year’s time. What Statoil have done at the business level is bold, agile and sounds to have been very effective. He talked about management styles applied to Theory X and Y people and how traditional management doesn’t work in a dynamic environment.

Over a period of years, Statoil have moved to embrace a management style that recognises rapid change is inevitable and the way to deal with it is to trust and empower employees (sound familiar??). They have also moved away from traditional budgeting process to focus on just-in-time decision making on expenditure. They trust people to do the right thing rather than implement policies to enforce it (eg. No travel policy), then do something about the few who try to abuse the system. They have broken the link that exists in most organisations between targets, forecasts and resources – sure, they still use these, but they measure and track them relative to their competition, not in absolute terms and adapt them whenever they need to.
Statoil have taken the idea of Balanced Scorecard, which many organisations use and tried to find a business differentiator. In their case, they ripple this through the organisation through “Ambition to Action” plans – each group in the organisation identifies its vision and strategies, then creates metrics for each and identifies actions needed to meet the objectives. A recent innovation is that each part of the organisation (and individuals as well I guess) now updates its Ambition to Action when needed, and not necessarily on an annual basis, so some get updated more frequently and others less. Real food for thought here, I rushed out and ordered Bjarte’s book as soon as the session was over!

Scott joined Expedia a few months ago and has the job of re-invigorating the brand and positioning it for future growth. He talked through his approach and the challenge he has set the organisation to move to a release cycle of 2 weeks for new features and products.  His approach has been to create a bold vision and mission statement – that Expedia should delight its customers and become a trusted source for all their travel needs. He highlighted the need to break down existing organisational silos and mental models, to focus the organisation on realising change and highlighting what will happen if change doesn’t take place.  Again, he stressed the need for responsiveness in the organisation and how continuous deployment can help that goal.

Presented by Martin Fowler and Jez Humble and based on Jez’s book Continuous Delivery, this was a shortened re-run of a seminar I attended at Thoughtworks a couple of months ago. It was good to hear Martin’s take on the subject and it broadly validates the approach we are trying to take here in Caplin. What’s the difference between continuous DELIVERY and DEPLOYMENT? Simply that while that aim of both is to be in a position at all times to be able to deploy working software, with continuous deployment, that final stage is automatically done. Another question to ask and that will focus attention on continuous delivery is “How long would it take your organisation to deploy a change to one line of code?”  Our target at the moment in Caplin is within 2 weeks, companies such as Flickr appear to be able to do it much quicker.
All in all this was a useful day with a number of thought-provoking sessions. I was unable to attend the second day, but my colleague and our Build Manager, James, did go and presented a brief session on our use of Go, so maybe he will post some impressions from that.
Now I’m off to talk to our CFO about budgets…