Around fifty UX Agilistas descended on Caplin’s London office yesterday for an Agile UX Meetup event. It was great to see Martyn Jones from Mind Candy again as I enjoyed the previous event they had hosted.
A small army of Caplinites kept the event running smoothly and we had a nice mix of designers, developers, project managers and QA engineers ready to lead our guests on safari!
The original idea was to tour both our product development on the first floor and our professional services on the fourth floor of our offices. Then discuss and contrast the approaches and agile design tools used – what works internally and what changes have to be made when working with external customers. But (unsurprisingly) our professional services work is client confidential so we had to keep all our top secret work tucked away, safely on the fourth floor.

We started the safari at a corner of the office that had a team Kanban board sprint planning and a design board. The project was near the last sprint in the current phase so there were a lot of artefacts around.


Most of the discussion was around the Kanban board and the progression of the cards through to ‘done done!’. The limits on the stations were brought up and Pratik, Benjamin and Rafael described how last week a queue had formed in the code review station and how the team had ‘swarmed’ to clear the backlog.
We stopped briefly to discuss a cool project involving Jira that Toby and Yasser are working on as a dev day project (I’m sure we’ll be blogging about that soon).
Next up I had brought down some old workshop artefacts and put them up including a narrative journey map, contextual map and a proxy persona.

Discussion here included the use of the emotional barometer and how identifying pain points and focussing ideation and later design and development effort around these areas can really breakthrough and enhance the UX and interaction flow. 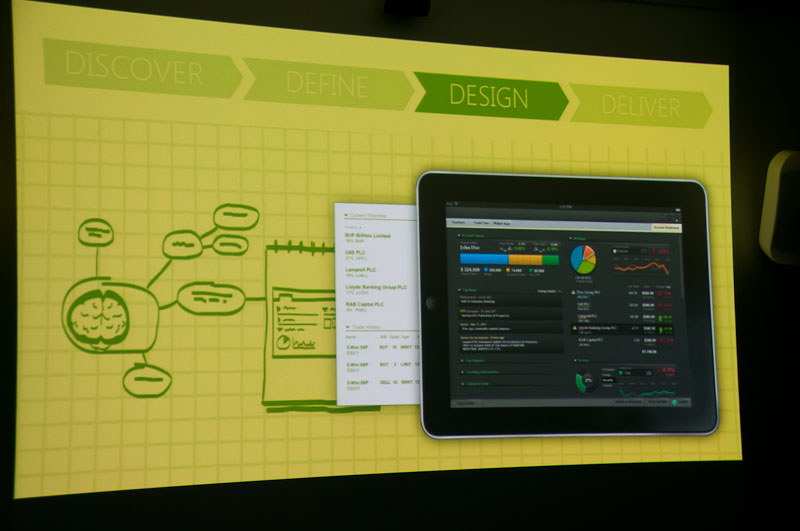 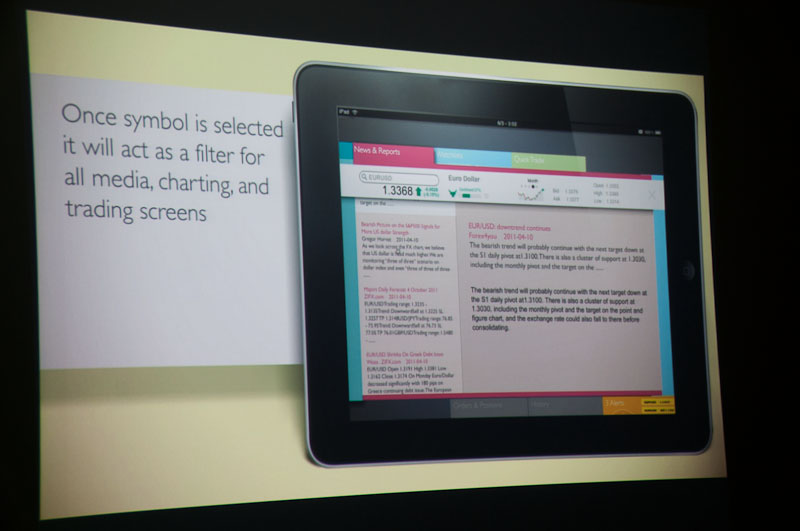 Arthur had set up some great rolling showreels of our animatics and video prototypes. We had these running on the projectors in our glass walled meeting rooms.
Along the opposite wall I had set up a design wall showing a selection of design artefacts including sketches, concept boards, empathy maps and storyboards. 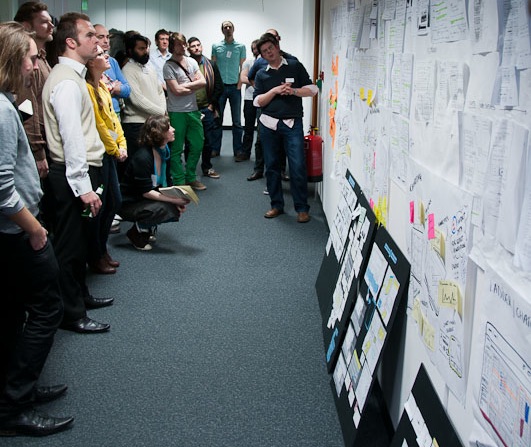 We discussed how design walls support design synthesis and the serendipitous connections that emerge. One issue with design walls is that if the client isn’t able to experience it first hand then it’s difficult for them to appreciate the time and creative energy that they embody. We had some foamcore boards that we have experimented with as they are then portable and can be taken to meetings but you do loose some of the panoramic energy of a full design wall.
This neatly ended our safari and lead us around the office back to the meeting room where everyone grabbed some more refreshments!
Although we couldn’t physically tour our secret work on the fourth floor I did show some sneaky photographs of previous engagements (with all sensitive information redacted). I went through some of the design discovery work we undertake including stakeholder workshops and contextual studies.
A recent example that I wanted to share was a project war room where the combination of technical architecture, agile project planning (Kanban and storymapping), UX (designwall) could be seen ‘en masse’. Having demonstrated our approach to Agile and UX we opened up the floor for the fishbowl session…

On to the Fishbowl

Being in the fishbowl I have found it difficult to recall what was actually said. (Maybe it was the beer :)) but I do remember a lively discussion around moving from ideation through to agile delivery and the agile approaches we apply at Caplin along the way.

Pratik explained the important relationship between product owners, project managers and the design team.
To further explain how we’ve has managed to get designers and developers work so well together, Rafael elaborated on a few of the points from his blog post earlier this week Recommendations from Inside an Agile UX Environment. He emphasised the importance of sitting with your development team so that questions and dialogue could be easily exchanged. He also expressed how important it is to communicate with those in the business who have domain knowledge “in Caplin we’ve got a huge amount of financial trading domain knowledge and the UX team has really benefitted from being able to send queries to our domain experts at any time”.
The conversation continued around how clients feel about a UX team arriving/working on site and ‘taking over’ part of the office. Caplin designers shared their experiences, noting that it does take awhile for clients to get used to a team showing up and beginning to design software with a pen and paper, but that after a time they get used to it and the design team begins to work seamlessly with them. With the conceptual design artefacts helping as discussion aids and furthering the quality of the ideas and application design.
Wow! What a great evening. It was really nice to have so many compliments about our current practice and get confirmation from the Agile UX community that we are doing a lot of really cool stuff.  We carried on the discussion after our guests had left and agreed that when you are on the inside of the process – just getting things done the way you think best and making adjustments along the way, it’s easy to loose sight of what you have achieved. Getting external feedback is always a good reality check.
If this was of interest why not come along to one of the upcoming Agile UX Meetup group events!
Thanks to everyone that came along including  Johanna Kollmann the Meetup group organiser.

“I was very impressed with the level of design maturity demonstrated by the Caplin UX team and felt that their knowledge of Agile UX methodology was amongst the strongest I’ve seen in any UK company.”
Andy Budd – Clearleft

“It was really encouraging to see how much UX is a part of your whole approach. If you’ve found something that works and your team and client are happy, what more could you ask for?”
Martyn Jones – Mind Candy