So it’s over. 3 days and 3 nights at Qcon London. That’s a lot of software conversations. Here’s the round up from Caplin on Day 3. 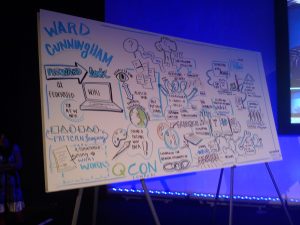 Keynote: A forward look at federated wiki – Ward Cunningham
Ward Cunningham was the inventor of the wiki and his talk was aimed at describing the next generation.  Again there was a mural of the talk created as it was given. We definitely need to get a mural artist at Caplin for all our meetings.  Ward talked about the incorporation of static, dynamic and interactive content into wikis, as well as previous wikis.
His vision was one of Data Visualisation merging with Data Access. More of this in a later talk.  After describing the information ecosystem that he wanted to federate he showed us some videos including one of his piezo detector Txtzyne oscilloscope real time updating a D3 image on his federated wiki page.  He regarded the federated wiki as the ‘Effective network’ of people doing similar things, rather than the ‘social network’ of people who actually knew each other. All this was mind blowing, but is it a good idea? I suppose time will tell.
Visualizing the web – Dio Synodinos
35,000 years ago the cave painters used their cutting edge technology to express themselves:  fingerpainting.  Today we have a number of low and high level tools to visualize with on the web:  CSS, SVG, Canvas, WebGL; as well as Raphael, processing.js and D3.
We walked through examples of consuming and repackaging data with pure CSS3, or mediated by JavaScript, via heatmaps of the most forked and most watched projects on github.  We were then shown a comparison of the relative merits of SVG, Canvas and WebGL as the low level options. Something new for me here, google happily indexes SVG, useful if you’ve got data in a diagram you need indexed. We use canvas at the moment through Emprise charts, but always looking to pick up new libraries, a lot to investigate here.

The WebGL example (http://seeplan.bengler.no/planimator) was an animation of the amount of construction approved in Oslo over time.  It would be difficult to conceive of another way that this data could be communicated so effectively.  Only after that were we told about the higher level tools to make our lives easier.
Raphael produces SVG output which automatically falls back to VML on older browsers.
Processing can be implemented in pure JavaScript or Processing compiled to JavaScript.
D3 was the most interesting though, as it binds data to the DOM and then applies data driven transformations from then on.  It also includes beautiful ready to use layouts.  We were shown visualizations for navigating into graphs, and Radar charts.
Sadly the talk had to end shortly before we saw an animated Chord chart of the journeys between stations of London commuters, using  Bezier curves.  We did however, find out that Bezier curves were heavily used by the French motor industry in the 1960’s and 70’s in their body designs!
Play & Grails, a fireside chat between two leading web server-side frameworks – Various
A bit of a car crash talk here trying to argue for and against Grails or Play for building webapps with no real takeaways. For my mind Grails is dying and Play isn’t the answer the world is looking for. In general Oracle is killing off the JVM by not innovating. Other solutions are taking centre-stage e.g. node.js, but there isn’t a winner in the server side space at the moment which makes it interesting. Canvassing opinion on “what is the simplest way to get data from a database into a restful API to be consumed by a browser” has given me many responses all conference.
Here Comes Wearable Technology! – Rain Ashford 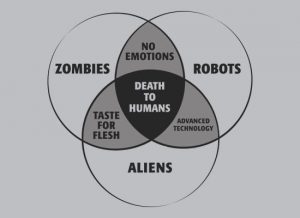 Completely off topic for Caplin, but a a fun talk. Started off talking about history of cyborgs and going over the work of early wearable computing genius Steve Mann with a brief detour via Robocop and also noting that watches were the first wearable tech. Picked up a lot of tech to investigate later.

She also demoed a lot of her work. Some of which can be seen here: http://rainycatz.wordpress.com/2012/10/22/baroesque-barometric-skirt/ . Most of it achieved by a lilypad and some conductive thread to make circuits in clothing. Best slide of the conference here though:
In Memory Trade and Message Repositories – John Davies
We started with a brief history and the increased regulation required post 2008 and Dodds-Frank and EC legislation.  This coupled with the explosion in the volume and complexity of trades to be stored means a rethink of the data layer is necessary.  Derivatives are now ubiquitous and the FpML they are based on can be Byzantine in their complexity. 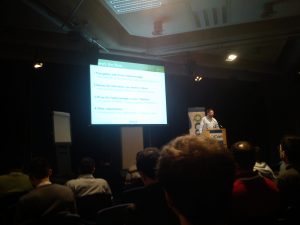 The established data storage is all relational in structure, but now the majority of data that is required to be stored is hierarchical.  In a sense there are two options, but with either a bridge has to be built.  Either the relational databases stay and they do little more than becomes indices to  CLOBs of hierarchical data, or there is a need to look at Graph and NoSQL databases.  The RDBMSs will become difficult to search, and performance is the key here.  Alternatively the Graph and NoSQL databases may be a better architectural solution, but they do not yet have a good search query structure.
I suspect the architectural solution of an in memory database with a NoSQL behind it is the likely winner.  I.e. getting an in memory OO DB layer on top of a NoSQL backend.  But the suppliers of these databases need to rally together to solve the search query problem – something that MongoDB highlighted they have improved recently in earlier talks.
The technology behind an Equity Trade – John O’ Hara
This was a great and detailed talk about how the Equity markets work across the world.  Apparently equities are the second simplest asset class after FX.   NYSE was the biggest market by value, but India the biggest by volume.  A pointer to the way exchanges may change in the future.
Then we were introduced to the range of trading types within equities from Single Orders through to High Frequency Trading, the UAVs of the financial world, via Program, basket trades and algorithmic trading engines.  No doubt these are all meat and drink to the Business, but the talk started with the observation that the IT guys are often told ‘what’ to do, rather than ‘why’.  Intriguing given that Dan North’s first step in his talk the previous day for how to get the best out of the IT guys, was to get them to understand the business domain.
We were then taken through the lifecycle of a trade, and also made aware of the quote from Goldman Sachs that described one of it’s goals as to be a ‘low cost provider’.  McKinsey also had a report on ‘The Triple Transformation’.  All encouraging investment banks to take risks with technology to cope with the sea change in their volumes of trades and the reduced profits to them of managing those trades.
Some of the same NoSQL and in memory solutions were name checked again when the actual technologies in use were displayed.  The conclusion was that we may be entering a new era of banking technology.
Fin
After the open spaces at the end of the day we’re all done, packed up and back to work Monday. A great conference where we’ve met some good connections, shared a lot of ideas and of course: plenty free beer, cakes and cheesy vendor t-shirts.